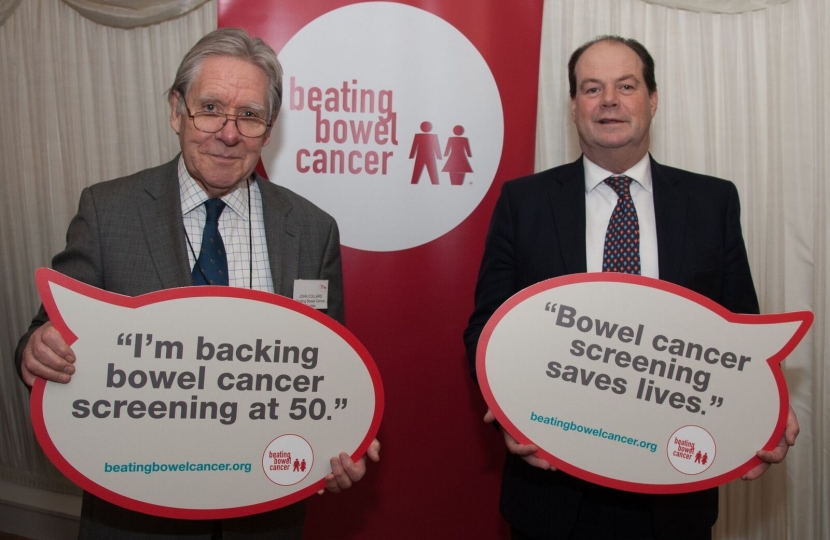 Yesterday I attended a Westminster reception hosted by the charity Beating Bowel Cancer to hear the case for reducing the bowel cancer screening age.

There I met with bowel cancer patients and families, health professionals and members of the charity at the reception, as well as Wimbledon business-owner John Collard who is a trustee of the charity.

I heard that variations in the screening age across the UK could be leading to thousands of bowel cancer patients in their 50s having a delayed diagnosis.

The charity called for the screening age in England, Wales and Northern Ireland to be lowered from the age of 60 to 50, to bring it in line with Scotland.

Bowel cancer is the UK’s second biggest cancer killer but this doesn’t have to be the case. Being diagnosed with bowel cancer at the earliest stage offers a 97% survival rate. But without screening, the majority of patients between 50 and 59 may not be diagnosed until a later stage through their GP or A&E. At that point the cancer can be more difficult to treat and if diagnosed at a late stage their survival odds could be as little as 7%.

I was interested to hear Beating Bowel Cancer’s plans for the future of screening and pleased to pledge my support for them.

We all need to do our bit to support any improvements to early diagnosis rates if we are to stop bowel cancer being one of biggest cancer killers in the country.