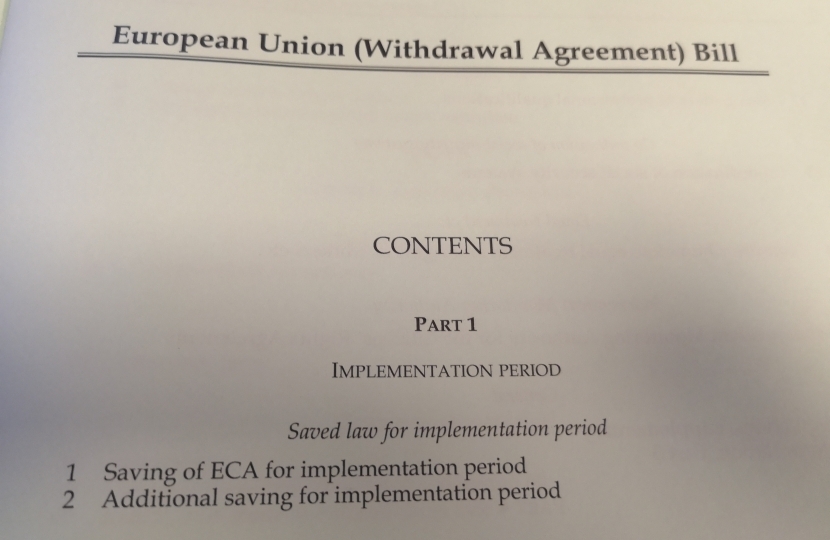 This week the House of Commons passed the European Union (Withdrawal Agreement) Bill.

Instead of joining me in trying to look to the future, the Liberal Democrats and Labour kept fighting the battles of the past.

Due to their actions both Mrs May’s deal, and early attempts to secure a close future relationship with the EU failed. Indeed, their failure to support successive votes on a Withdrawal Agreement made the threat of No Deal in March, April and October possible. As I have said so often before, and has been proven over the last year, the best way to stop No Deal is to vote for a deal.

I have long taken the view it is better in Parliament to fight for achievable victories, instead of focusing one’s effort on unachievable grand plans. By focusing on a Second Referendum instead of attempting to ensure the best possible Brexit and stopping No Deal, like some of us who voted Remain have done since 2016, the Opposition are now reduced to political grandstanding and posturing.

I shall continue to be a pragmatic voice in Parliament, putting my efforts into securing the best possible future relationship with the EU. A relationship that protects trade with the EU, protects the Good Friday Agreement, protects our partnerships with our friends in Europe, and protects the rights of EU citizens living in the UK.

That is what I have tried to do since the referendum, and that is that I promised my constituents in the General Election.

The time to consider what action, if any, will be needed to stop a No Deal will be later in the negotiations, which is exactly what I said throughout the last phase of negotiations and why I acted to stop No Deal when it was necessary.

I am confident that a deal can be negotiated with the EU this year. It is in both side’s interests that 2020 is the conclusion of this issue.

However, as with the last phase of negotiations, there will be a choice between a deal with the EU or No Deal. The best way to stop No Deal is to agree a deal, and everyone should unite to achieve this.

Parliamentary approval of the future relationship

I have been a champion of the role of Parliament in the Brexit process since the referendum, and since I voted for Parliament to have a role in approving the Withdrawal Agreement in 2017.

Parliament will have a role in approving the Future Relationship Treaty with the EU. Under the Constitutional Reform and Governance Act 2010, international treaties (which includes Free Trade Agreements), must be laid before Parliament for 21 sitting days before they can be ratified. A treaty cannot be ratified if the House of Commons resolves that it should not be ratified.

Furthermore, the free trade agreement with the EU will almost certainly require changes to legislation, which will need to be approved by the House of Commons.

In the last phase of negotiations, we saw how important being flexible in one’s negotiating position is, and therefore I do not think it is wise for the Government or the House of Commons to set red lines right at the outset of the process, and therefore I voted against New Clause 6.

The rights of EU Citizens

The Withdrawal Agreement protects the rights of EU citizens, and this legislation puts that protection into UK law.

The provisions on the rights of EU citizens were agreed with the EU27, and in the words of the European Commission “The Withdrawal Agreement protects the rights of over three million EU citizens in the UK, and over one million UK nationals in EU countries, meaning they can continue to live, work or study as they currently do.”

EU citizens lawfully residing in the host state on the date of the UK's withdrawal, in accordance with EU law on free movement of EU citizens, can apply for ‘settled status’ to protect their rights.

The reason there is an application process is so EU Citizens in the UK can have documentation to prove their rights. Indeed, many EU Member States currently require EU Citizens to register with local authorities in order to exercise their free movement rights after three months.

The amendments regarding appeals processes were unnecessary. Clause 11 of the Bill already contains a power to put in place various rights of appeal in connection with citizens’ rights and immigration decisions, including refusals under the EU settlement scheme.

Furthermore, UK Courts will need to take into account ECJ judgments on cases that happen after Brexit, if they concern citizens’ rights. If UK courts want clarity or advice on matters of EU law, they will be able to ask the ECJ questions of interpretation.

I raised the concerns about family reunion for unaccompanied asylum-seeking children with the Home Office, and you can find a letter on the subject from the Rt Hon Brandon Lewis CBE MP below. If you are interested in this topic, I would encourage you to read it.

The Minister confirms that Government policy has not changed on this matter and that protecting vulnerable children remains a key priority.

I am pleased that the Government remains fully committed to ensuring that unaccompanied children can continue to be reunited with specified family members who are in the UK and that this is a negotiating objective with the EU.

The Home Secretary wrote to the Commission on 22 October to start negotiations with the European Union on future arrangements on family reunion rights. This amendment would have added nothing to what is already happening.

I am disappointed that yet again the opposition parties have chosen to grandstand rather than to assess the reality of what the Government is doing.

The Liberal Democrat MP who moved the amendment regarding the Erasmus programme admitted it would only require the Government to do what it is already doing, and that is to seek to participate in EU education programmes post-Brexit.

The Political Declaration between the UK and EU envisages the UK participating in EU programmes, which is something I welcomed after it was published.

This amendment would not have ensured negotiations with the EU will succeed and would not have done anything beyond what is already happening. The rejection of this amendment does not mean the education participation between the UK/EU will end post-Brexit as some people are suggesting.

Finally, I am always happy to respond to questions about Brexit or any other matter from constituents. The best way to contact me is by email on stephen.hammond.mp@parliament.uk

I can confirm I have signed the McPartland Smith amendment to the Fire Safety Bill, which provides that the owner of a building may not pass the costs of any remedial work attributable to the provisions of this Act on to leaseholders or tenants of that building.