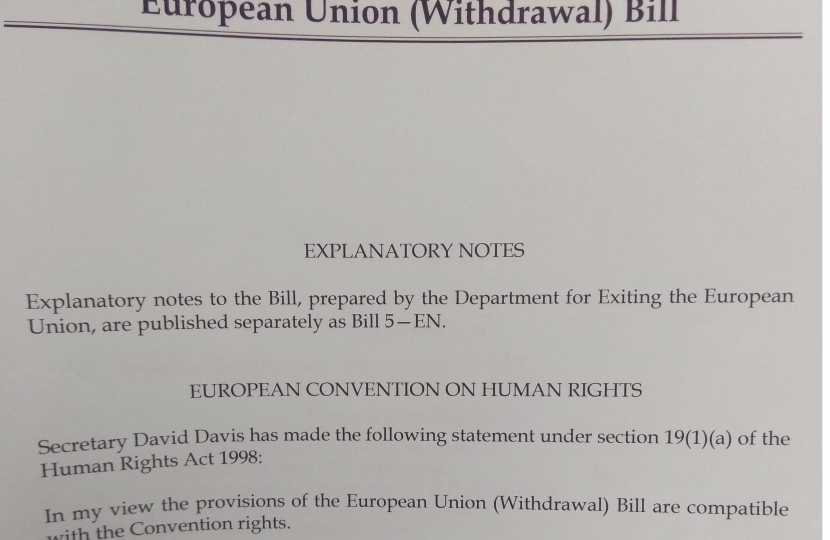 This is why my colleagues and I tabled Amendment 7 on the first possible day, Monday 11th September.

At present I have tabled twelve other amendments with my colleagues:

I have not signed the amendment regarding a referendum at the end of the process. That is outside of the scope of this Bill. The aim of this Bill is to bring all EU law into UK law, and so our amendments are focussed on that.

I understand there are calls the United Kingdom to pursue membership of the Single Market through the European Free Trade Agreement (the so-called ‘Norway option’). While this Bill is not the right time or place to insist on Single Market membership, it is an option I am carefully researching and evaluating. This is an issue I am sure will be debated in greater depth as the negotiations proceed.

You can find a full list of the amendments here.

Finally, please see below my statement on the Bill from 7th September, and further amendments I have signed.

I have signed 10 further amendments to the Bill.

Today the House of Commons began its scrutiny of the European Union (Withdrawal) Bill, which starts the task of separating EU law and UK law, and establishing new domestic regulatory and administrative system. This is the biggest legislative challenge the UK has ever faced, especially as it must be completed in under two years.

This Bill is necessary and sensible in principle, but it is not without major faults which I shall be seeking to amend.

This is not an exercise of merely technical importance, it will significantly impact the day to day workings of industries highly regulated by EU law, such as financial services.

There are two parts of this process, adoption and adaption. Firstly, EU law must be brought into domestic law. This is sensible, as it allows for legal certainty and avoids a vacuum from the moment we leave the EU. Secondly, it is also necessary that much of this law is amended, for example to remove references to EU institutions the UK is no longer part of. I support the principle of this Bill, and that is why I will not vote against it at Second Reading.

However, in my view the powers granted to Ministers are too potent and too broad, leading to the very real risk that important policy changes to retained EU law will be made by Ministers without the full scrutiny of Parliament. That is why I am pressing the Government to accept a number of amendments at the Committee Stage of this Bill to fix these issues.

The powers conferred to Ministers in this Bill are extremely potent.

For example Clause 9 allows the Government to implement any withdrawal agreement by regulations, but that these powers will lapse on exit day.

This power can only really be used once the content of the withdrawal agreement is known. Given Clause 9 could be used to bring in major policy changes relating to EU citizens, the Irish border and dispute resolution, and the assurances made by the Government on a Parliamentary vote to approve a deal, the implementation of any exit deal must surely be scrutinised by Parliament.

The powers have an extraordinary scope, notwithstanding the restrictions on matters such as increasing taxation, creating criminal offences and amending the Human Rights Act.

The way the powers are defined contribute to their wide scope. With regards to the powers in Clause 7, it is unclear what terms such as ‘deficiency’, ‘redundant’, ‘failure to operate effectively’ or of ‘no practical application’ really mean. This is not just a technical question, people and businesses will want to know what rules are likely to be changed, and which are not.

I would like the Government to consider tighter definitional criteria behind the powers, and a range of safeguards to stop the powers being abused, such as in the Legislative and Regulatory Reform Act.

It is also alarming that under the Bill as it stands, in theory a Minister through a statutory instrument with minimal or no Parliamentary debate could remove the existing rights of EU Citizens if a deal is not reached with the EU. Earlier in the year after I met with the Home Secretary she promised that nothing will change for any EU citizen in the UK without the consent of Parliament, and this Bill should make sure this is the case. EU Citizens contribute so much to our country, and London in particular, and so their rights should be protected in our law.

In the Bill only a very limited set of changes will lead to full Parliamentary scrutiny, with the default position being a change will only attract the “negative” scrutiny procedure.

Constitutionally this should be a major concern. The role of Parliament is to scrutinise legislation, and for many Leave voters “taking back control” and sovereignty were the key issues. Yet if this Bill passes in its current state then legislation being made in Brussels with little UK Parliamentary scrutiny will just be replaced by unaccountable Ministers making legislation!

Given the complexity and uncertainty of the task ahead it is not good enough that the default position is the negative scrutiny procedure. It is simply impossible for the Government to anticipate all potential changes at this stage and determine the appropriate method of scrutiny. I would prefer to see a more flexible solution such as that put forward by the House of Lords Constitution Committee, where a Parliamentary Committee can determine whether a change deserves full Parliamentary scrutiny, or is merely a minimal technical change. This is a procedure already in place for other Ministerial powers, and so there is no reason why we should not use it here.

With regards to the programme motion, I believe the 8 days of 8 hour debates is sensible and should allow enough time to scrutinise the details of the Bill. After representations from me and my colleagues, the Government has agreed to seriously consider extending the time for debate if necessary. I look forward to contributing to the debate at Committee Stage.

While this Bill purports to deal with the legal technicalities of leaving the EU, it could have wide ranging effects on people and businesses. That’s why we need to ensure that Parliament is still able to hold the Government to account and ensure Brexit works as well as possible for the country and London. The principle of this Bill in bringing all EU law into UK law is right, and so I will not vote against it at Second Reading, however I want to see a number of amendments made at Committee Stage.