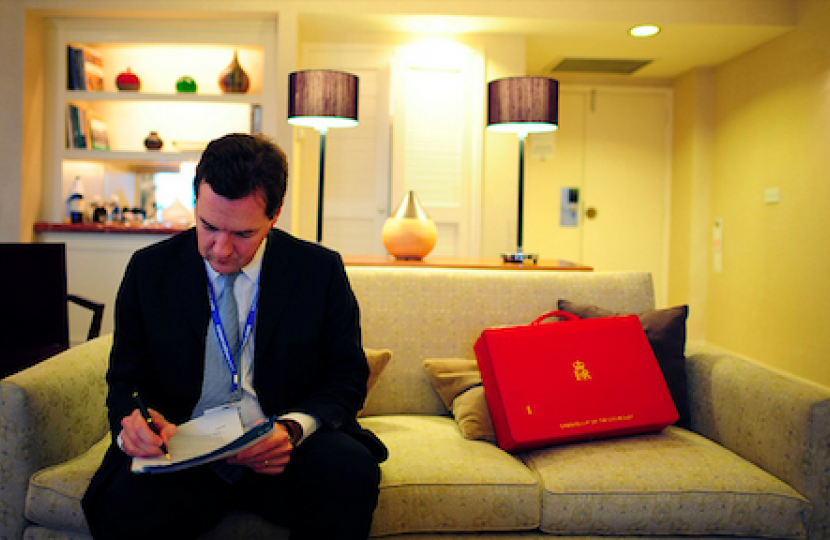 Welcome my latest community update containing news on the Budget, the Airports Commission’s report and the Tramlink Upgrade at Wimbledon station.

Last Wednesday, the Chancellor of the Exchequer announced the Budget. I believe it delivers security for working people and moves Britain towards being a higher wage, lower tax and lower welfare society.

Measures announced in the Budget include:

- The Government will meet the NATO pledge to spend 2% of national income on defence every year this decade;

- 3 million new apprenticeships will be created by 2020;

- Reforming the welfare system to make it more affordable.

With these measures the deficit will be reduced by around 1% of GDP on average per year, meaning that a surplus will be achieved in 2019-2020.

I think this is a fantastic Budget, which will reward those who work hard and keep the country on the road to recovery.

One other announcement I particularly support from the Budget is the raising of the tax free allowance for rental income for a room in your private house. From April 2016 anyone renting a room will not have to pay tax on the first £7,500 of income, up from £4,250.

I think there is the real potential for this measure to help the supply of housing for students, people who may have short term jobs in London or only live in London part of the week.

I am delighted to have been elected to the Treasury Select Committee. As the economic recovery progresses and with the Eurozone in crisis, the Committee has a very important job to do of examining the work of the Treasury, HMRC and the Bank of England and contributing to the analysis and discussion of economic policy.

The Wimbledon Championships once again showcased to the world what our great constituency has to offer. My congratulations to the team at the All England Club for another fantastically organised tournament, and of course to Novak Djokovic and Serena Williams for their success.

However, we were once again let down by the Council on the issue of litter, in particular during the Championships in the Town Centre area. As thousands of tennis fans visit Wimbledon we want to leave them with the impression of a clean and welcoming town.

I will be holding Merton Council to account on this and am prioritising a number of problem locations. With local Conservative councillors I also held a very successful Community Clean-up morning last month and will look to hold more soon. If you have any suggestions for areas that need particular attention, please let me know.

What is clear, is that Britain needs extra airport capacity so it can continue to grow; business leaders have been calling for expansion for years and it needs it to be done quickly. However the environmental impact must be taken into account too – I want to see economic growth which is environmentally responsible.

The Commission noted that air quality and noise were factors in Gatwick’s favour, so I am disappointed with the Independent Airport Commission’s recommendation of only a third runway at Heathrow.

I am really keen to hear what your views are on the possibility of Heathrow expansion so please do let me know.

You may have noticed that construction work has begun at the Tramlink platform at Wimbledon Station, meaning there will be no Trams between Wimbledon and Dundonald Road until the end of October.

This work is to build an additional platform at Wimbledon, which will allow trams to arrive and depart Wimbledon more often, boosting their frequency from eight to 12 trams per hour.

So you are aware, the annual RideLondon event will be taking place across London on Saturday 1st August and Sunday 2nd August. This event allows both professionals and amateurs to ride along closed roads in London.

The cyclists will pass through Wimbledon on Sunday.