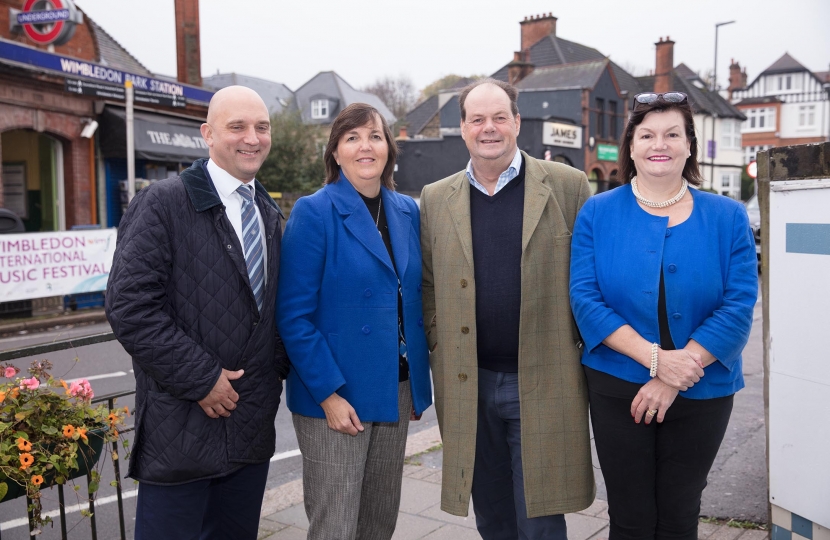 Welcome to my latest community email. Below are just some of the things I have been doing locally and in Parliament since my last email.

On Wednesday 13th December I voted against my party for the first time in support of Amendment 7. I wanted to take this opportunity to explain why I did so.

Amendment 7 is an amendment to Clause 9, which gives wide powers to Ministers to implement any withdrawal agreement with minimal Parliamentary scrutiny. As I said in September, given Clause 9 could be used to bring in major policy changes relating to EU citizens, the Irish border and dispute resolution, and the assurances made by the Government on a Parliamentary vote to approve a deal, the exercise of this power must surely be scrutinised fully by Parliament.

This is what Amendment 7 does, by requiring an Act of Parliament before the powers in Clause 9 can be used. That is the full extent of Amendment 7, it does not stop or delay Brexit, it just requires Parliamentary approval for the final exit deal.

How we leave the EU will have a significant effect on people and businesses across our country and it is the most significant and complex constitutional decision this country must make for a generation.

Therefore, it is absolutely crucial that this decision is made by Parliament, and by each MP on behalf of their constituents. Anything else would be an abdication of our duties as Members of Parliament.

I took no pleasure in voting against the Government and my Party for the first time, and it was a very difficult decision but I believe it was the right one.

You can see my full statement on this vote on my website here.

Finally, I have written an article for The Times, in which I make the case for taking a close look at the European Free Trade Association (EFTA) for our future relationship with the EU. You can see this article here.

Conservative councillors have tabled a motion for next week’s Full Council meeting urging the Labour-run council to buy the police station from City Hall and then lease it back to them. This would mean the borough could retain a much valued police station in Wimbledon.

The purchase would be possible as Merton Council’s capital programme for 2017-18 is currently underspent by over £11million whilst the council also has total usable reserves of £91million. Under plans first mooted by Hillingdon’s Conservative administration last month, MOPAC would then be charged a yearly rent of around one per cent of the purchase price whilst the Council would make a grant covering half of the annual running costs of the police station.

Sadiq Khan’s plan to close Wimbledon Police Station will put at risk the safety of everyone who lives and works here. Yet time and again he has refused to listen to the thousands of local residents who have made clear his proposal is totally unacceptable.

Now he and Merton Labour have the chance to think again. I hope that both the council and City Hall will accept our proposal and do the right thing for Wimbledon.

After years of campaigning, Transport for London have agreed to make Wimbledon Park station step free by 2022.

This will mean that a lift is installed, helping older and disabled passengers get down to the platform with ease, as well as those with luggage and pushchairs.

1.89 million journeys are made from Wimbledon Park each year, and now even more local residents will be able to use this station more easily.

Wimbledon Park is one of just 13 stations across London which have been selected for the latest wave of step-free access. This will mean by 2022 40% of the Tube network will be step free.

Councillor Oonagh Moulton said ‘My Conservative Councillor colleagues and I welcome this announcement. We have been campaigning for step free access at Wimbledon Park since I first stood for election in 2002. It has been a long and persistent campaign for our residents and a great result which will help parents, carers, children, those with disabilities, those with buggies, and visitors and commuters with heavy luggage.’

The Wimbledon and Putney Commons Conservators Election is a postal vote that is held every 3 years to elect 5 trustees to oversee the management of the Commons. If you live within 3/4 mile of Wimbledon Common you pay a small levy with your council tax, and so shortly voters in your household will receive ballot papers in which you can vote for five conservators.

The role of a Conservator is voluntary, unpaid and not associated with any political party.

I am supporting the candidates in “Common Sense” for the Future of the Commons group; Tim Bowen, Peter Hirsch, David Hince, Sarah-Jane Holden and Diane Neil Mills. They are a group of individual candidates who will bring a wide variety of skills and experience to the table for the good of the future of the Commons.

Heathrow Airport have just launched the first part of their consultation on expansion and their plans for the future. Please note this is separate from the Government’s own consultations

There will also be a public meeting/exhibition on Thursday 22 February, 12pm-8pm, at the Antoinette Hotel, The Broadway, SW19 1SD as part of the consultation.

Residents in South Wimbledon may have noticed that the Kingston Road Post Office closed following the resignation of the postmaster.

I have been assured by the Post Office that they are focusing their efforts on appointing a new operator and are working hard behind the scenes to ensure that disruptions are kept to a minimum and aim to reinstate Post Office services in the local area as soon as possible.

The vacancy is currently advertised on their website: www.runapostoffice.co.uk and a member of their field team has also visited the area to discuss the opportunity with local retailers.

For months now residents and residents groups have been fighting Labour Merton Council’s plans to partially demolish Merton Hall on Kingston Road to make way for a pentecostal church. This is part of a freehold swap to move the Elim Pentecostal Church from the High Path Estate to make room for a new secondary school.

The campaigners have collected thousands of signatures on a petition against the plans. The Council has now listed the hall as an Asset of Community Value. I have been supporting the campaigners in asking Historic England to list the building.

It is my view that local residents must be heard and their views taken into account by the Council.

However, the Council have continued with their plans despite strong opposition, reservations about the value of the deal for Council tax-payers, the demolition of some of Wimbledon’s history and the High Path site not being ideal for a new school. The Council could and should now re-consider other sites for this school, such as the former Virgin Gym site off North Road.

Alongside the Conservative team in South Wimbledon, I will continue to work with residents. If you would like to find out more, please see the Save Merton Hall Facebook page here.

The number of people getting in touch with me to report litter problems continues to dramatically increase. People are rightly proud of our area, and are frustrated when Labour Merton Council cannot provide a simple service like emptying your bins on time and sweeping the streets. Their decisions to stop weekly street cleaning and the weekly bin collection are making a mess of our community.

Merton Conservatives and I are campaigning to improve this situation by reintroducing weekly street cleaning, protecting the weekly bin collection and increasing mobile CCTV to crack down on fly tipping. If elected to run the Council in May, Merton Conservatives will retain the weekly bin collection and reduce the size and number of Labour’s new wheelie bins. You can support our campaign atwww.muckymerton.com

To do our bit, Cannon Hill Conservatives have arranged a community litter pick this Sunday 4th February at 2pm, meeting at South Merton Train Station. You can find out more, or let the team know you'll be coming along, here.

We are also planning on holding litter picks for the Great British Spring Clean weekend, which is 2-4th March. I will let you know the details when they are finalised.

After years of representing residents near the Atkinston Morley Hospital site, the Committee of LUNG (Land for Urban Neighbourhood Greenspace) have decided to close their group.

I just want to thank and congratulate Ralph Cake and all the local residents for their hard work over the last few years. They have managed to make a real difference in their local area.

The Friends of Morley Park will be the group representing local residents views on the Morley Park area now, and I look forward to working with them.