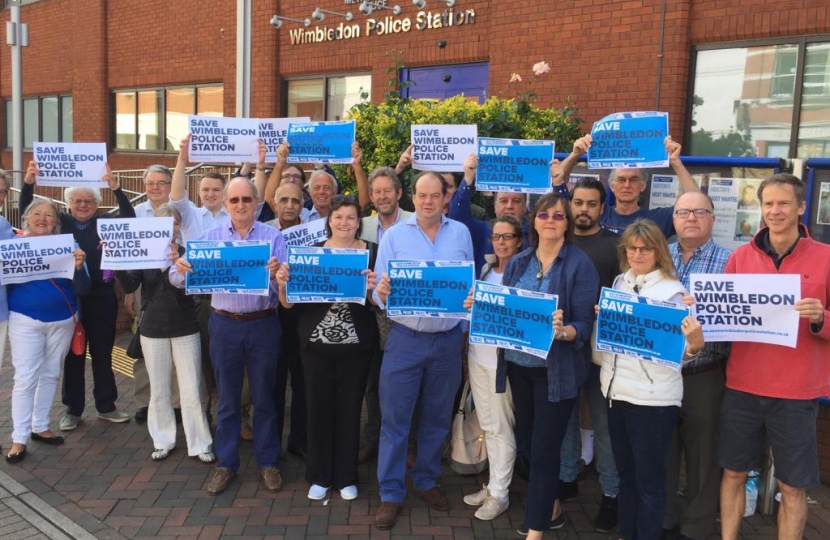 The police do a fantastic job keeping us safe as we saw last week in their immense bravery on London Bridge.

Everyone has the right to feel safe at home and in their community. Keeping our streets safe is one of my top priorities across Wimbledon, Raynes Park and Morden. To ensure this happens, we need a local police station for our area, with police on site and available for fast response to reports of crime.

In 2017 the Labour Mayor of London announced his plans to close Wimbledon Police Station.

As many of you know, I launched a local petition which was signed by thousands of you, which was delivered to the Mayor. I also made it clear to the Mayor on multiple occasions that his plans were unjustified and unacceptable.

Whilst the courts found that the Mayor’s original consultation ahead of his announcement was flawed, it does not stop the Mayor from closing our police station. It is still at risk because the Mayor could still close our police station as he only has to consider the ‘impact of new technology’.

The only way to save Wimbledon Police Station is for the Mayor to change his mind.

I will campaign tirelessly to make him do so.

At the same time, as you may have heard, the Conservative Government are funding 1,300 police officers in London. Those officers will need somewhere to operate from, as there is not enough room at Mitcham Police Station, therefore strengthening the case to keep Wimbledon police station open.

I believe these extra police officers are needed to keep us safe and provide the best opportunity to keep our police station. This can only be delivered by a Conservative Government.

If re-elected, I will not stop campaigning on this issue and will do all I can to keep our streets safe and our community free from crime.

I can confirm I have signed the McPartland Smith amendment to the Fire Safety Bill, which provides that the owner of a building may not pass the costs of any remedial work attributable to the provisions of this Act on to leaseholders or tenants of that building.