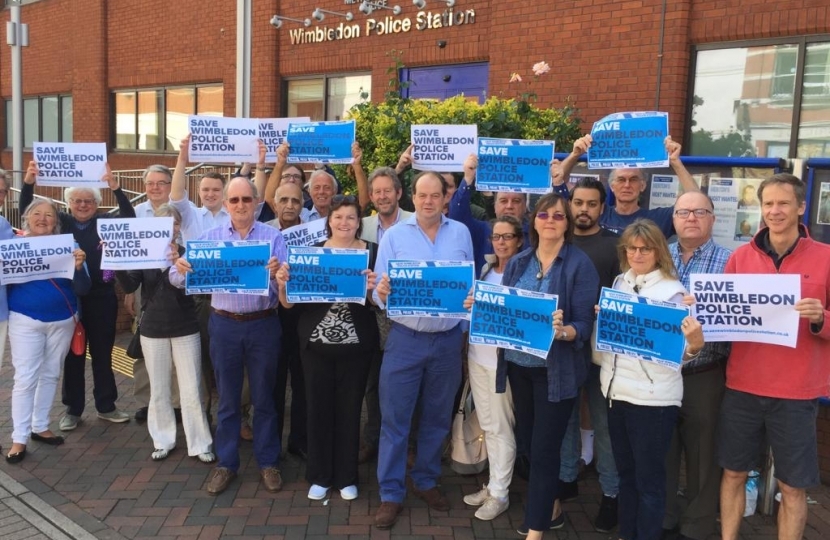 In 2017 the Labour Mayor of London announced his plans to close Wimbledon Police Station.

As many of you know, I launched a local petition which was signed by thousands of you, which was delivered to the Mayor. I also made it clear to the Mayor on multiple occasions that his plans were unjustified and unacceptable.

Whilst the courts found that the Mayor’s original consultation ahead of his announcement was flawed, it does not stop the Mayor from continuing with plans to close our police station.

The local Liberal Democrats have admitted this at a public meeting, stating the court result was “a temporary stay of execution. People keep congratulating me on saving the station, I keep saying I haven’t.”

Of the 30 police stations facing closure, 27 (including Wimbledon) are still open, 1 has been sold and 2 have had their property leases expire

I met with Chief Superintendent Sally Benatar on Monday 13th January to discuss policing priorities locally, and the Police Station. She told me there was no new information, but the fact that there are more police officers coming to the Met, and the need to have emergency response vehicles based at Wimbledon Police Station, means that there are operational pressures to keep it open.

I impressed upon Chief Superintendent Benatar how vital it is that Wimbledon retains its police station.

We also discussed local policing priorities, and I raised a number of examples of burglaries and thefts from cars locally. Please always be vigilant and avoid leaving valuables on display in your car.

My Statement on No10 Parties

I am disappointed and concerned by the parties held at Number 10. The rules were clear at that time and I think everyone has been aware of the rules and guidelines throughout the pandemic.