I am pleased that the Government’s concessions on refugee rights, environmental standards were approved today in the House of Commons. This is a result of a significant amount of work behind the scenes.

I have said on numerous occasions that it is not important what the customs solution is called, all that matters is that it protects frictionless trade and prevents a border in Northern Ireland – again this is why the Northern Ireland amendment yesterday was so important.

Finally, regarding the EEA Amendment, unfortunately, the Commons does not have the numbers to support continuing membership of the EEA at present. I did not vote against the amendment and I have tabled an amendment on this to the Trade Bill (below) which will debated next month.

The EU (Withdrawal) Bill was primarily a process Bill and in its original form had no discussion about customs or trade to any substantive effect. That is why colleagues and I have forced the Government to agree to bring back both the Customs Bill and Trade Bill for the period after the June European Council.

In my view this will be a key moment in British economic and political history. This will be when the substantive amendments on the EEA and a Customs Union will be debated.

Finally, you can read my update on day one of the debate here. 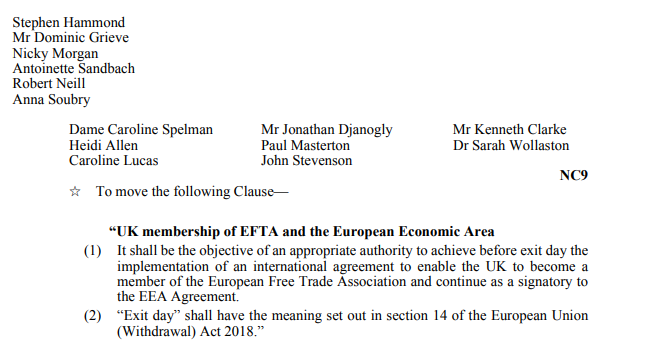