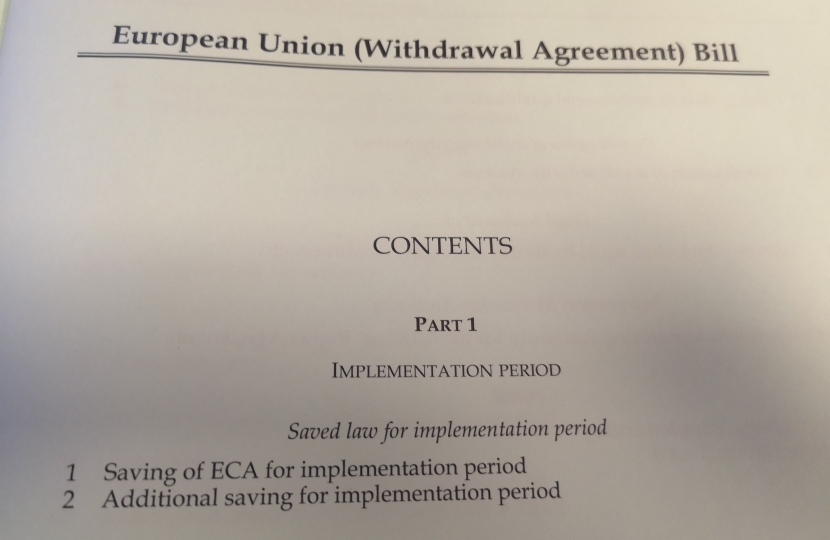 This evening I voted for the second reading of the Withdrawal Bill and for the programme motion. I did this to fulfil my promise to stop No Deal, to see if this deal has support in the House of Commons and to allow amendments to be debated.

I have had many people writing to me regarding amendments they would like to see, such as more control over the transition period, more control over the negotiating mandate, and even for a second referendum. Alongside colleagues I have spent the time since the Bill was published working on amendments, including one to Clause 30 regarding an extension of the transition, which the Government had agreed to.

The fact is, these amendments could not be considered if the Bill did not pass a second reading nor if a programme motion failed to pass.

Now that the programme motion has been rejected, what happens next is not clear. The country is once again facing uncertainty, and the patience of our European friends is being stretched to the limit. However, as the Bill has passed I hope the Government will now bring forward a new programme motion to allow a longer period of scrutiny.

Many asked me to reject Mrs May’s Withdrawal Agreement in the hope that something better would come from that rejection, and many of the same people ask me to reject this deal for the same reason. When Mrs May’s deal was rejected the result was division and uncertainty. This weighs heavily on my mind.

I will now work to ensure the Bill has proper scrutiny, to ensure the future relationship reflects the best interests of Wimbledon, and continue to work to avoid No Deal.

Today the House of Commons voted to withhold approval of the Withdrawal Agreement until the required legislation passes. I did not support this, as I think the public and our European friends expected a verdict on the deal today. I particularly wanted to see a vote on the deal today so we could spend next week acting in reaction to that result, whether it was approval or not. There is now likely to be a vote on the deal on Monday.

I understand some were concerned about the risk of No Deal were legislation not to pass next week. The House of Commons has shown on multiple occasions that it is able to act swiftly to avoid No Deal. This was the case when the Benn Act was passed in a few days before prorogation with my support, and over which I lost the Conservative whip. If such a threat were to materialise over the next week, I of course would act yet again to stop No Deal. However, the best way to avoid No Deal starts with supporting the deal.

Next week it is likely that the Withdrawal Agreement and Implementation Bill will be introduced in Parliament. I shall support this legislation and look at all amendments carefully. I am particularly interested in amendments that secure Parliament’s continuing role in any negotiations with the EU. This is something I have championed consistently through this process, starting back in 2017 when I voted for Parliament to have a vote on the deal.

I shall provide further updates throughout the course of next week.

Since the 2016 Referendum I have been clear that Brexit is likely to diminish us economically and diplomatically.

I have also been clear that No Deal would be a disaster, and I have always sought to stand up for the people of Wimbledon and our country considering this belief. I have worked with MPs from all parties to ensure No Deal does not happen, by ensuring Article 50 could be extended in March, in April and now in October. As a result, I had the Conservative Party whip withdrawn last month.

The best, easiest and most certain way to stop No Deal is by agreeing a deal with the EU, which is why I voted three times for Mrs May’s Withdrawal Agreement.

The EU and UK have now agreed a new Withdrawal Agreement. This deal is less advantageous than I would have liked but is also less egregious than many suggested it would be.

Over the last day I have received hundreds of emails on all sides of the debate – those who want the Deal approved for the certainty of the transition period, those who want it rejected, and those who want it subject to a referendum. Whilst I have never ruled out another referendum, it would appear there will not be a chance to vote for one tomorrow, so that is not an option.

If I were to reject the deal tomorrow, the Prime Minister would have to ask the EU for an extension, under the terms of the “Benn Act”, which I supported. But what happens next is not clear. Many asked me to reject Mrs May’s Withdrawal Agreement in the hope that something better would come from that rejection. This did not happen, the result of those rejections have been less advantageous solutions, division and uncertainty. This weighs heavily on my mind.

If I vote to accept the deal, whilst less than excellent, it would be a vote to stop No Deal on October 31st as I have promised, and it would allow me to continue to fight for the best possible future relationship with the EU.

The Labour and Liberal Democrats, both locally and nationally, are very clear on what they do not want. However, they have not put forward any solutions that would definitively resolve the situation we are in. They are also happy to say they are against No Deal but fail to take all measures necessary to stop No Deal by supporting a deal.

In the end one cannot always be against everything. To ensure a better future and the ability to proceed, one must be for something.

My vote tomorrow will be determined solely by my core principle; that I always try to act in the best interests of the Wimbledon constituency and the country. My voting record throughout this process demonstrates this and that I do not take these decisions lightly.