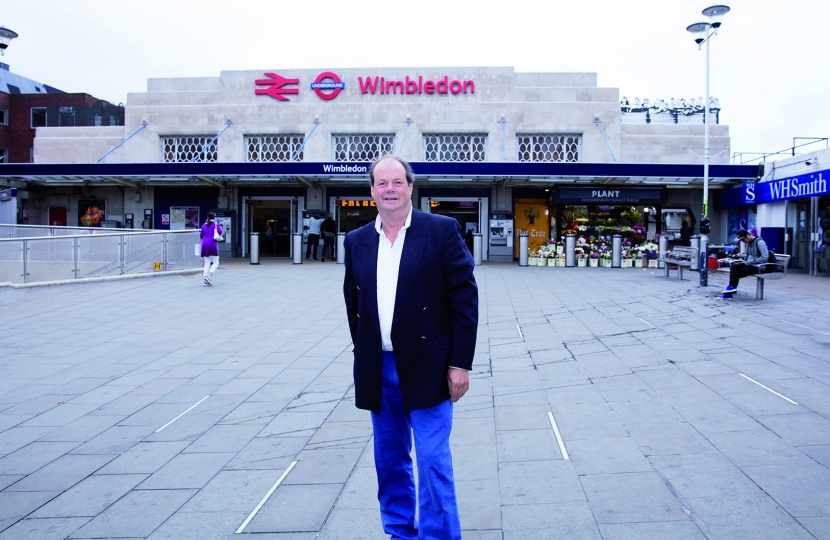 Welcome to my April community email. Below are just some of the things I have been doing locally and in Parliament since my last email. This is my 23rd community email since my re-election in 2015 and I hope you have found them useful.

This month the Prime Minister, Theresa May, announced there will be a General Election on Thursday 8th June. It is my intention to stand as the Conservative Party candidate for Wimbledon.

I believe that Wimbledon is the best constituency in the country. It has been a privilege and an honour to have served as your Member of Parliament for the last 12 years. I have always tried to make Wimbledon’s voice heard in Westminster and protect our local interests.  I have enjoyed and been dedicated to representing the constituency, living and working closely with the local community to achieve real change.

At this General Election, the decision for our country is not to fight old battles, but to unite to secure the best possible future. This election will determine whether Theresa May or Jeremy Corbyn conducts our negotiations with our European neighbours, and sets our priorities.

I was disappointed with the Referendum result as I voted to remain, as did an overwhelming majority of my constituents. However, the country has spoken and democracy is what makes our nation great. Since the Referendum I have been working constructively to ensure Brexit works for us here in Wimbledon and in London by opposing a hard-Brexit.

As you know, Crossrail 2 is potentially the most significant local development for a generation, and will have an impact on residents across Wimbledon, Raynes Park, Motspur Park and Wimbledon Village. I recently made a short video about this which you can watch here.

Last year Crossrail 2 consulted on route options, some of which would have devastated our Town Centre. You can read my response to the consultation here.

This business case has now been submitted and I have also asked the Secretary of State for Transport what their timescale is for considering it, and when they expect to hold the next consultation. I have received answers which you can read here and here – but they do not tell us much. I expect we will hear more about the next consultation and route option in June or July.

When the consultation is held, I will do everything I can to publicise it, and I will ensure that local residents’ voices are heard, and I will continue to fight for the best possible solution, so that Crossrail 2 brings transport improvements and benefits for the local community.

I am delighted to hear that the Government has decided to drop the unfair increase in Probate fees.

This would have been a tax on Londoners and a tax on death. I wrote to the Ministry of Justice to object to the proposals, and also challenged them in a House of Commons committee.

Clarion Housing (formerly Circle) have now submitted an outline planning application for their project to build up to 1570 new homes on the High Path Estate. I have been told that it has not yet been added to the Council’s planning website, as there are so many files to upload. I shall post on Facebook and Twitter when I find out that it is online.

Clarion have promised to hold a series of events and workshops so that residents can have a say over the future of their area. As this programme takes shape, I will make sure to publicise the information.

Clarion will also be sending around information on the planning applications to residents. You can also find a copy of this information on my website here.

Update on the Woodman Pub

I am very pleased to say that I have now heard that the new owners of the Woodman Pub in Wimbledon Park, Goldcrest, plan to re-open the pub.

From what I understand, Goldcrest will be consulting on proposals for the site in the near future. These will include refurbishing and restoring the locally listed pub to its former glory to help ensure its future viability. I will be meeting Goldcrest next week.

I will keep an eye out for the consultation proposals and will ensure it is publicised widely so locals can have their say.

I also raised concerns with Merton Council that the trees around the pub were being prepared to be cut down. I am pleased to say there is now a tree preservation order in place in respect of all the trees on the land.

A number of people have asked me what impact the General Election on 8th June will have on the Boundary Commission proposals to change the Wimbledon constituency.

The General Election on 8th June will be held on the current Parliamentary boundaries – so there will be no change to Wimbledon for this election.

The Boundary Commission will continue with their review, with the next proposals due by the end of the year for further consultation. Under the current legislation, this means that new boundaries will be in force for a 2022 General Election.

Network Rail and South West Trains are currently working together to invest more than £800 million into the South Western railway network. As part of this, major upgrade work will be carried out at London Waterloo station (Britain’s busiest railway station) from 5th to 28th August 2017 to provide a 30% increase in passenger capacity. A FAQs on the work is available online.

Fewer South West Trains services will run on the network from 5th to 28th August due to the work and significantly fewer trains will call at Wimbledon, Raynes Park and Motspur Park stations. Overall, services and stations will also be much busier than usual. Passengers are strongly advised to plan their travel in advance. Draft morning timetables and service frequencies are already available online. Final timetables will be available from mid-May onwards. For more information please visit the South West Trains website.

I am always happy to publicise community events in my community email. If you have something you would like me to include, please do reply to this email. Below is a message from Wimbledon's Carlton theatre group.

When King Verence is murdered by his own cousin, the land is in uproar.  Can words change the past and let evil rule or will the witches be in time to save the day?

Wimbledon’s oldest amateur theatre group, Carlton, is excited to present Terry Pratchett’s®Wyrd Sisters, adapted for the stage by Stephen Briggs. This fantastical, satirical, retelling of a certain ‘Scottish Play’ is sure to put a smile on your face. You are invited to an evening of magical mayhem, a comical brew of good witches, divers soldiers, peasants, wicked aristocracy, a ghost and a fool… With an amazing cast, and suitable for ages 12+, this play is a perfect option for a family outing. Tolkein, P.G Wodehouse and of course, Terry Pratchett® fans- get your tickets soon, because this production is guaranteed to be a comical hit.

Tickets can be purchased here: http://www.atgtickets.com/shows/wyrd-sisters/new-wimbledon-studio/

Finally, don't forget you can keep up to date with my work by liking my Facebook page, or by following me on Twitter.