The Police, Crime, Sentencing and Courts Bill is an extremely wide-ranging Bill and there is much within it I warmly welcome. It has provisions on sentencing, accessibility for deaf jurors, criminal damage, youth and adult rehabilitation, sexual offences and positions of trust, bail and parole, road traffic offences, early release for serious offenders, protecting emergency service workers, protests, sex offender management and unauthorised encampments.

Whilst much attention has been drawn to the provisions of the Bill dealing with protest (which I will discuss below), it is important that the Bill is looked at in its entirety and the other provisions are not neglected.

The Bill should also be looked at alongside the Domestic Abuse Bill, given the criticism from some quarters that it does not deal with this heinous crime. The Domestic Abuse Bill is currently going through Parliament and aims to raise awareness and understanding about the devastating impact of domestic abuse and improve the effectiveness of the justice system in providing protection for victims of domestic abuse and bringing perpetrators to justice.

I have raised the issue of reforming rehabilitation in the House of Commons many times, for both youth and adult offenders. A focus on rehabilitation is the best way to stop the cycle of offending, giving people a second chance.

This Bill will give the courts powers to give stronger alternatives to custody for youth offenders, by piloting changes to Youth Rehabilitation Orders. This is extremely welcome as young offenders should be rehabilitated in their community, and given another chance, so far as is possible.

For adult offenders a “problem solving court approach” will be piloted for certain community and suspended sentences. This aims to ensure there is more tailored, intensive and structured support to rehabilitate offenders in the community, bringing together a multi-disciplinary team to address the causes of offending.

This Bill also contains important measures to protect victims. For example, it will encourage the police to impose strict conditions on bail more frequently in high harm cases, and a new duty to seek the views of victims on pre-charge bail conditions. This will be particularly important in domestic abuse cases.

The Bill extends the scope of the current legislation that criminalises sexual activity with a child under the age of 18 by people who hold defined positions of trust to include faith leaders, sports coaches and others who similarly coach, teach, train, supervise or instruct a sport or religion on a regular basis.

Automatic halfway release point from prison will be ended for an additional cohort of serious sexual and violent offenders; making a Whole Life Order the starting point for the premeditated murder of a child and preventing the automatic early release of prisoners who are of significant public protection concern. Similarly, the Bill will also introduce a new power to enable the Parole Board to set aside decisions if they are fundamentally flawed, or where significant new information comes to light after a hearing or decision.

The Bill outlines several measures that could allow the courts to operate as normal as soon as possible and cut into the backlog.

Virtual juries were trialled with huge success last year on four occasions by the International Fair Trials Organisation JUSTICE most notably in Wimbledon. I made the point in the House of Commons that perhaps these should be known as ‘Wimbledon Juries’.

These trials were subject to research and authentication by the University of Oxford, which proved the trials were as effective in executing their responsibilities as juries in courtrooms. They can be inexpensive and can return juries to their historic origins – based within communities. I have urged the Government to continue to look into this possibility.

On juries, the Bill provides that British Sign Language (BSL) interpreters can be present in the jury deliberation room, meaning that profoundly deaf individuals are not prevented from participating in jury service simply because they require the assistance of a BSL interpreter.

This Bill also makes changes to police powers over protests, which has been subject to extensive attention in recent days following the tragic murder of Sarah Everard and the scenes at the vigil in Clapham. My statement on Sarah Everard’s murder can be read here, and I asked the Home Secretary a question regarding the safety of women which you can watch here.

In the House of Commons on Monday 15th March I stated that I welcome that the Home Secretary has instructed Her Majesty's Inspectorate of Constabulary to investigate the policing at the Clapham vigil.

Given the interest and concern regarding the clauses of this Bill relating to protest I will set out in detail below exactly what they do, and my view.

The right to protest is a fundamental political right. However, individuals also have the right to get on with their lives without serious disruption. Seeking to balance rights is always a difficult exercise.

Before looking at some of the provisions in detail, I should point out that when using any public order powers, including those proposed in the Bill, the police must act within the law and be able to demonstrate that their use of powers are necessary and proportionate. They must act compatibly with human rights, principally Article 10 (freedom of expression) and Article 11 (freedom of association). The same applies to any Government Minister in exercising powers to make delegated legislation.

I should also make it clear that my vote in favour of this Bill at Second Reading on 16th March is a vote for the general aims of the Bill. The Bill then moves to Committee Stage where it is scrutinised, line by line and amendments can be made At this point a number of colleagues and I hope some improvements will be made to the text of the Bill, as I will set out below.

Concern has been expressed about the public nuisance offence set out in Clause 59 of the Bill, in particular the wording “suffers serious distress, serious annoyance, serious inconvenience or serious loss of amenity”. I have copied the exact wording from the Bill below for reference. 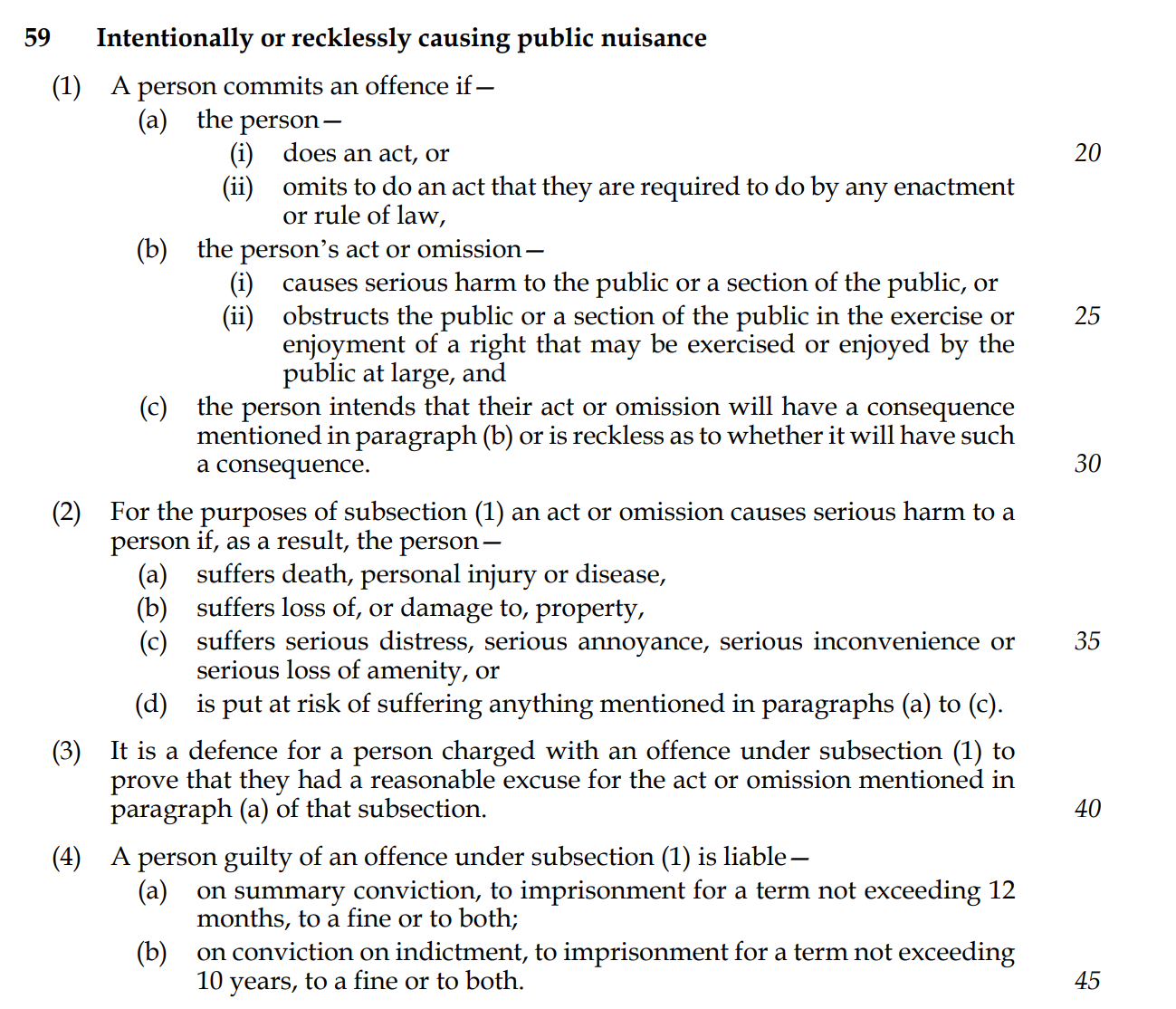 This is not a new offence. Public nuisance is currently a common law offence and was defined as follows by the independent Law Commission: “The central feature of public nuisance, on which all else turns, is Lord Bingham’s “requirement of common injury”. Traditionally, this takes two forms. One is danger, annoyance or loss of amenity affecting those present in a local area, such as noises and smells. The other is an infringement or obstruction of a public right such as a right of way". This current offence has no maximum punishment, whereas the version in the Bill has a 10 year maximum sentence.

You will note significant similarities between the Common Law offence and the proposed statutory offence in the Bill.

The independent Law Commission recommended that the law of public nuisance be placed on a statutory footing, so that both the police and individuals can be completely clear about what conduct is criminal.

By putting this existing crime into statute, it is an opportunity to make it exceptionally clear, to those who need to enforce this legislation and those it is enforced against, what the elements of the offence are.

Therefore, I believe that the language of clause 59(2)(c) should be defined more clearly. The language of “distress” and “loss of amenity” are familiar to the courts.  But, “serious annoyance” and “serious inconvenience” are not.  I know “annoyance” has been used in Public Order Acts in Ireland, but I would welcome a very clear definition here. This is something I want the Government to look into at the Bill’s Committee Stage.

This is a point I made in the House of Commons yesterday. You can read my speech here.

This Bill would widen the range of conditions that the police can impose on static protests (such as start and finish times), to match existing police powers to impose conditions on marches

The Bill would also broaden the range of circumstances in which the police can impose conditions on protests, including a single person protest, to include where noise causes a significant impact on those in the vicinity or serious disruption to the running of an organisation.

It should be reiterated that this is related to placing conditions on a protest that can go ahead. It is not about cancelling, or criminalising, protest itself.

As I said in the House of Commons, the definition of “noise” from a protest which could “result in serious disruption to the activities of an organisation”, should be more clearly defined so it does not catch the sort of chanting one would expect at a protest and that the police and so individuals know exactly what conduct is covered.

In looking at a clearer definition, the Government could perhaps look at the reference to World Health Organisation guidelines for community noise in the case of R. (Newey) v. South Hams District Council [2018] EWHC 1872 (Admin).

A few constituents have written to me regarding the provisions of the Bill which relate to protests around Parliament. This is found in Clauses 57 and 58.

Clause 57 measure will enable the police to direct an individual to cease obstructing vehicular entrances to Parliament and make it an offence not to comply with such a direction.

This will protect the right of access to the Parliamentary Estate for MPs, Peers, Parliamentary staff and any others with business there as recommended in the Joint Committee on Human Rights in their 2020 report “Democracy, freedom of expression and freedom of association: Threats to MPs.”

Clause 58 contains a power to allow the Home Secretary to extend the existing controlled area around the Palace of Westminster if either House of Parliament is to be located somewhere else due to the Parliamentary building works.

This focuses too much on the monetary value of damage and takes insufficient consideration of emotional or other distress caused by criminal damage.

Therefore, the Bill removes the consideration of monetary damage in cases of damage to a memorial.

The Bill also makes clear that flowers left for commemorative purposes count as a memorial for the purposes of an increased sentence. Whilst the focus of attention has been how this part of the Bill relates to certain statutes, I believe it is right that the emotional and sentimental impact of criminal damage can be better taken into account by the courts, rather than monetary value being the main consideration.

Unauthorised encampments have been an issue locally. For example, in recent years there have been several unauthorised encampments locally on private land. One in Raynes Park resulted in a large amount of fly tipping, causing significant environmental damage and distress to local residents. However, in this case, the police had insufficient powers to deal with this antisocial behaviour and force the encampment to move.

The Bill creates a new offence for where a person who resides or intends to reside with a vehicle on land fails to leave the land or remove their property without reasonable excuse when asked to do so by the occupier of the land, or a constable and they have caused, or are likely to cause, significant damage, disruption, or distress (including anti-social behaviour).

The Government is still committed to delivering a cross-government strategy to tackle the inequalities faced by Gypsy, Roma and Traveller communities. There is wider Government support for the provision of traveller sites via the New Homes Bonus which provides an incentive for local authorities to encourage housing growth in their areas, and rewards net increases in effective housing stock, including the provision of authorised traveller pitches.

I am aware of a great deal of local concern surrounding the proposals for a nine-storey residential block next to Wimbledon Chase Station. Equally I have been aware of some local support for the application.