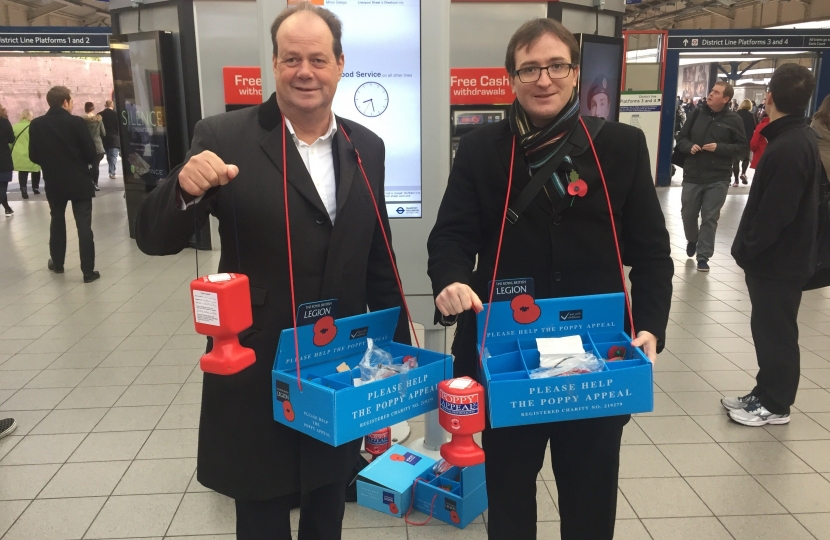 Welcome to my November community email. Below are just some of the things I have been doing locally and in Parliament since my last email.

However, a number of interesting announcements were made. I was particularly pleased to see significantly increased spending on infrastructure with a new National Productivity Investment Fund to provide £23 billion of additional spending, and in particular a £3.15bn fund for new affordable homes in London.

Below are just some of the other announcements made, but you can see full list here.

I was very concerned that the latest consultation on Crossrail 2 had not begun on time. So to find out more I asked a Prime Minister’s question on the topic, and I spoke to the Managing Director of Crossrail 2 who has confirmed that there will be no consultation or revised route options published until after the business case is settled, and so it will be postponed until at least spring 2017.

This confirms what the Prime Minister said to me in the House of Commons:

Stephen Hammond MP - As a former Wimbledonian, my right hon. Friend will understand the significance of transport for south-west London and in particular for Wimbledon. Can she assure me that the Government still support Crossrail 2, and will she ask the Secretary of State for Transport to set out the timetable for the delayed consultation?

The Prime Minister - I can absolutely give the commitment that we continue to support Crossrail 2. We are waiting to see a robust business case and a proper funding proposal for Crossrail 2. My right hon. Friend the Transport Secretary will in due course set out the timetable for that, but as a former Wimbledonian I can assure my hon. Friend that we are well aware of his interest in the Wimbledon to Waterloo aspects of the project, and that the needs of the local area are being taken into account.

To me it seems that following the National Infrastructure Commission’s recommendation that Crossrail 2 could be delivered at a lower cost, the Government wants to fully take stock of this before the next stage of planning for the project. I expect the Government will be asking Transport for London for a full business case for their Crossrail 2 plans, to ensure that they deliver value for money to the taxpayer and real improvements to London’s transport network that only a new line can provide.

It may be that Crossrail 2 serves fewer stations to reduce costs, and I will of course fight to ensure that any cost reductions do not justify destroying our Town Centre. I have recently met with Lord Ahmad, the Transport Minister responsible for Crossrail 2, to make this case.

I know this is a very important issue for many residents, and alongside your local Conservative councillors, I will of course continue to keep you updated with any further news. Please do share this update with your friends and neighbours.

My views on Heathrow Expansion

I am disappointed that the Government has made the decision to only expand Heathrow Airport.

In the interest of our country, I wanted to see an ambitious decision to allow both Heathrow and Gatwick to expand, which would have done more to relieve the capacity issues the country is suffering from and more to boost our post-Brexit economy.

Gatwick could be delivered in a quicker, cheaper and more environmentally friendly way than Heathrow. This would have allowed Heathrow the time to put in place stronger measures to mitigate the noise and air quality deficits of a third runway. I am not convinced this can be achieved quickly.

I have consistently expressed concerns about an expansion plan that only involved Heathrow. I am concerned that Heathrow has failed to spell out new flight paths and how that will affect Wimbledon. I will continue to press Heathrow to outline the impact on Wimbledon and oppose expansion if this affects us negatively.

I asked the Secretary of State for Transport how Heathrow expansion will be funded and how much taxpayers money will it require. The Government’s press release states “expansion costs will be paid for by the private sector, not by the taxpayer”, but industry experts have estimated £11.5bn of taxpayer support being needed. Unfortunately I was not given a clear answer – you can read my question here.

Merton NHS Clinical Commissioning Group have today written to me to confirm there are NO proposals to close any SW London hospitals in their Sustainability and Transformation Plan.

Their plan aims to build services around the needs of patients, invest more in community services, improve hospital estates and raise standards.

The plans are in development and will be subject to wider discussion, and a formal public consultation should proposals change any acute services. You can find out more here.

Last month I held an Adjournment debate in the House of Commons on changing the Schools Admissions Code to help summerborn and premature children reach their full potential. You can read the full debate here.

I was disappointed that the Minister was unable to set out a timetable for the consultation and changes.

Therefore I have written to the Minister for Schools, Nick Gibb, to raise several points and I am hoping to arrange a meeting with officials in the Department for Education.

Their proposals for Wimbledon and Merton are hugely disappointing and detrimental to the local area. The Boundary Commission’s own guidelines on community interest and cohesion have simply not been followed.

You can see more information on the proposals and the problems with them, as well as my speech to the Boundary Commission and a template response letter on my website here.

You can view the proposals on the Boundary Commission’s website here, just put in your postcode. To respond to the consultation, click “have your say” in the top right and click on the area you wish to comment on. I understand that the website is not the easiest to use, so you can also take part in the consultation by writing to “Boundary Commission for England, 35 Great Smith Street, London, SW1P 3BQ” or emailing information@boundarycommissionengland.gov.uk by the 5th December.

As ever, there are a number of Christmas events in the coming weeks across our local area.

Please note, that the Broadway will be closed for traffic between 5am and 10pm. You can find out more here.

On Thursday 1 December Love Morden presents Light up Morden, around the Civic Centre, Morden, from 4pm to 7pm, with business and community networking after 7pm in the Blue Junction restaurant.

The Christmas tree lights will be switched on at 5.30pm, and there will be carol singing, mince pies, children’s activities, a raffle and fireworks for the whole family to enjoy. Donations will be accepted for local charities Jigsaw4U and Merton Mencap.

On Saturday 3rd December, the 'Tuesday Rendezvous' club will be holding a Christmas Fair at West Barnes Library between 1pm and 4pm. Do pop along for homemade cakes, hand knitted goods, a lucky dip and a visit from Father Christmas.

Sunday 4 December Wimbledon Village Business Association presents Christmas in the Village from 10.30am to 5pm at various locations in the village. Enjoy fairground rides, a Santa’s grotto, activities for children and young people, Christmas tree lights switch on, crafts and carol singing.

It is open between 10.30am and 8pm on Friday 9th, and at the same times on Saturday 10th, with a 6pm Christmas show with choirs and bands. It is open from 12.30pm on Sunday 11th December, with carols among the trees from 4.30pm.

Earlier this year I was delighted to announce that my lengthy campaign for longer commuter trains from Wimbledon to Waterloo had been a success, with the extra carriages due to come into service by the end of next year.

Finally, don’t forget you can keep up to date with my work locally and in Parliament by following me on Facebook and on Twitter.