Today was the first of two days the House of Commons will consider the House of Lords’ amendments to the EU (Withdrawal) Bill.

It has been a frantic day and I have had countless conversations with colleagues and the Government all day.

Most importantly the Government accepted the Lord’s amendment on Northern Ireland which rules out any physical infrastructure at the border. The significance of this cannot be overstated. The result of this amendment is that the Government is legally compelled to ensure there is frictionless trade between the UK and EU to avoid border infrastructure in Ireland.

I am also very pleased that the Government have listened to me and my colleagues by making huge concessions on refugee rights, environmental standards, and participating in EU agencies.

Many constituents have written to me about the amendment on a “meaningful vote”, which builds on Amendment 7 which I voted for in December. The Government’s concession went some of the way by providing in law for a Parliamentary vote on the final agreement. However, Parliament must be able to have its say in a “no deal” situation and we made this point very strongly today to the Government. The Government has conceded this point and I expect to see a new amendment to cover this situation soon.

I have said on numerous occasions that it is not important what the customs solution is called, all that matters is that it protects frictionless trade and prevents a border in Northern Ireland – again this is why the Northern Ireland amendment today is so important. 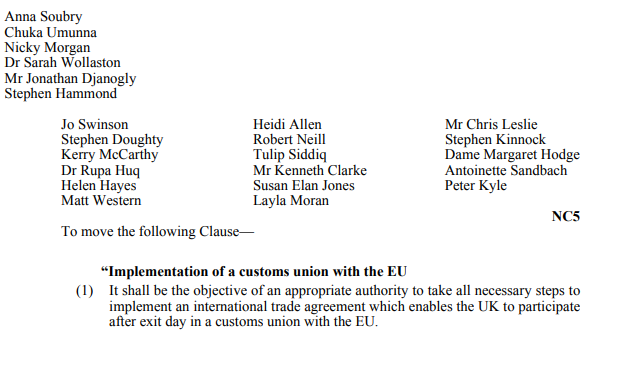