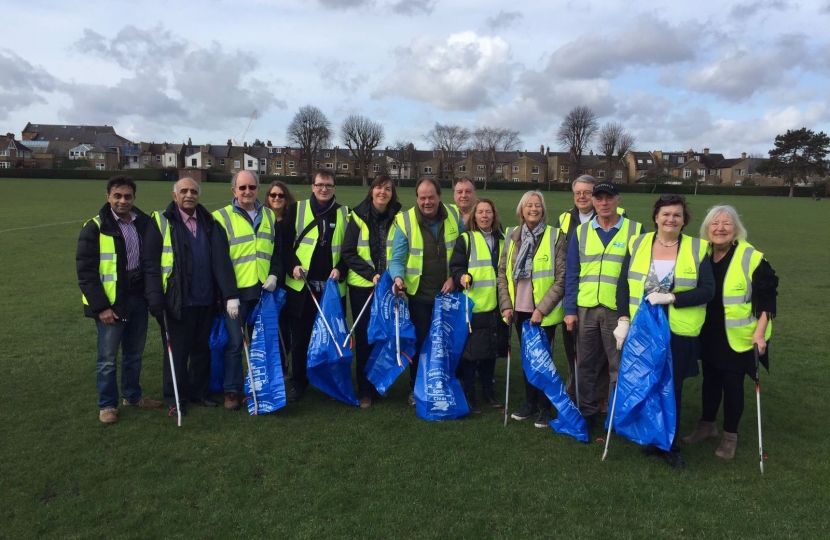 Welcome to my November community email. Below are just some of the things I have been doing locally and in Parliament since my last email.

Since my last email there have been a number of developments when it comes to Brexit.

You may have seen the front page of the Daily Telegraph earlier in the month which branded me and some of my colleagues as “mutineers” for our work scrutinising the European Union (Withdrawal) Bill. I was elected to represent my constituents and act in the country's best interest. Headlines such as this will not stop me from doing my duty.

A number of people have contacted me recently about the Government’s plans to fix the date of exiting the EU in UK law. In my view there is no need to do this. Having triggered Article 50 we are leaving the EU, and given the 2 year time limit this will most likely be at the end of March 2019. Fixing the Brexit date in law damages our negotiating position by removing any flexibility. There would be no vested interest for the EU27 to fully take part in negotiations, because the Government has boxed itself into a final date. Importantly this amendment would remove any possibility of an extension to the negotiations as provided for by Article 50 itself, even if we were finalising a deal in March 2019.

Over the last few months the number of people getting in touch with me to report litter problems has significantly increased. People love living in our area, and are frustrated that litter is making it less attractive. Labour-run Merton Council appear unable to provide a simple service like empting your bins on time and sweeping the streets. Their decisions to stop weekly street cleaning are making a mess of our community and it will get worse as they have decided to end the weekly bin collection from Autumn 2018.

Local Conservatives and I are campaigning to improve this situation by reintroducing weekly street cleaning, protecting the weekly bin collection and increasing mobile CCTV to crack down on fly tipping. You can support our campaign at  www.muckymerton.com

This month the Labour Mayor of London has published his report on police station front counters in London following the consultation which ended last month.  You can read the report here.

I am extremely disappointed that the Mayor is continuing with his plans to close Wimbledon Police Station. This is despite our community making it very clear this proposal is unacceptable through a petition signed by over 4,000 people and many responses to the consultation.

The Consultation Institute named this consultation the worst of 2017. I have written to the Mayor to request he stops the current plans to close Wimbledon Police Station and holds a fresh consultation, based on best practice, which residents can have full confidence in.

I raised these concerns in person to the Deputy Mayor for Policing, and in writing to the Mayor. These concerns have not been adequately addressed and there is no plan for local policing from the Mayor beyond selling off our police station. Furthermore, the Mayor has not addressed my request to meet with him to discuss this in person.

Wimbledon residents, especially those living around the Town Centre, will not forget this is a Mayor who neither listens to residents nor has any concern for their safety. I will continue to do everything I can to fight against these plans.

Last week the Chancellor delivered his Budget. This was a budget fit for the future, as the benefits from the pain our economy has faced in the past are emerging. I have spoken about intergenerational fairness in the House of Commons before, and I am glad that this budget takes real steps to address this. You can read my speech in the House of Commons on the Budget here.

Below are just some of the announcements in the Budget:

You can see a full summary of what the Chancellor announced here.

A number of constituents have been writing to me recently about school funding, so I thought it would be useful to put together a summary of the current situation, which you can find on my website here.

The Schoolcuts website is often highlighted to me, which argues that most local schools will have their funding cut. This is not a neutral website, it is a joint union campaign and is fundamentally misleading; under the new national funding formula every school will see a cash gain in Merton, as the Government are investing an additional £1.3bn in schools across 2018-19 and 2019-20, over and above existing spending plans.

Despite this increase in funding, from my many meetings with parents, teachers and school governors I understand there are funding pressures facing schools. I have written to the Chancellor and Secretary of State for Education about four points, which I think are important and would help schools:

This is your chance support the  Commission’s revised plans which keep Wimbledon together and acknowledge the strong community links across our area.

You can respond to the consultation by  clicking here, writing to “Boundary Commission for England, 35 Great Smith Street, London, SW1P 3BQ” or emailing  information@boundarycommissionengland.gov.uk

Finally, you can see my response to this latest consultation on my website here.

At a recent public meeting, residents expressed frustration at the length of time the barrier at Motspur Park was down before and after a train passed.

As promised, I wrote to Network Rail, and please find their response on my website here.

If you are registered with a Merton GP you now have access to a GP seven days a week. Patients can now be seen in their usual practice or at a local hub where the doctors can access their medical records.

In the first instance, anyone registered with a Merton GP should call their own practice during surgery opening hours or NHS 111 if the surgery is closed. A same day appointment will be provided either in the GP surgery or at one of our 2 local access hubs.

The hubs are located in local GP practices at the Nelson Medical Practice, Wimbledon and the Wide Way Medical Centre, Mitcham.

Thanks to the hard work of Conservative Wimbledon Park Councillors, in particular Cllr Linda Taylor, the developer of 12a Ravensbury Terrace has agreed to pay for a pedestrian/cycling footbridge across the Wandle from Ravensbury Terrace to around where Thornsett Terrace meets Groton Street. This will need agreement between Merton and Wandsworth Councils, which your local councillors are now working on.

This is welcome news, a bridge across the Wandle at this point would provide real benefits to local residents and would go some way to easing local traffic congestion as well as enhancing the Wandle trail.