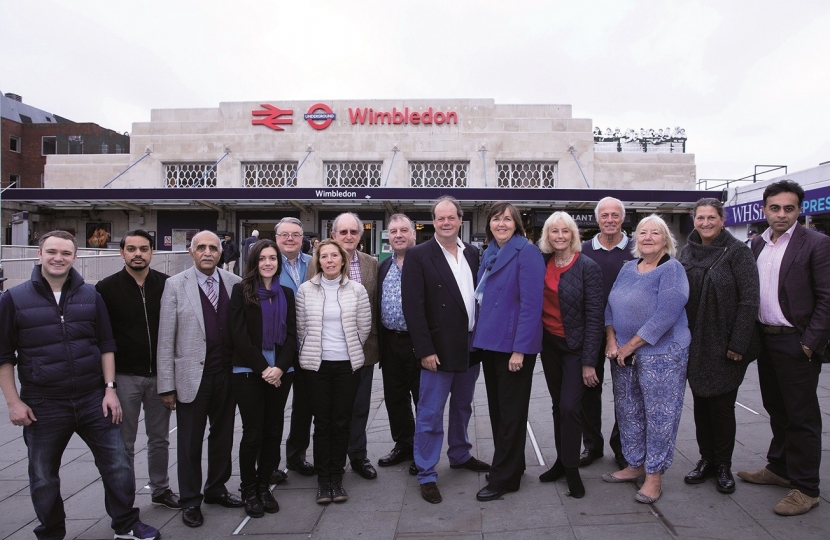 Wimbledon is the best constituency in the country and it has been a privilege to serve as your MP for the last 12 years. During that time, I have worked hard to make your voice heard in Westminster and stand up for residents on important local issues, including on:

I want to touch upon a few issues that people have brought up with me as I have been campaigning across the local area.

Saturday night's attacks on London Bridge and Borough Market were absolutely horrific. My thoughts and prayers are with everyone affected.

As ever, I am in awe of the professionalism and bravery of our emergency services who ran straight towards the danger. The speed of response was extraordinary, their actions undoubtedly saved many lives and we owe them our thanks.

It is unprecedented to have two major terrorist attacks during a General Election campaign. These terrorists hate our way our life and our democratic values. The best way we can respond is to continue to uphold our values.

Last year I campaigned, and voted to Remain, as did an overwhelming majority of my constituents. I was disappointed by the result, however, the country has spoken and democracy is what makes our nation great.

I accept the decision of the electorate and we must now look to the future not the past. That’s why since the referendum I have been working constructively with the Government to ensure Brexit works for us here in Wimbledon and in London by opposing a hard-Brexit.

I made many of these points in my speech in the House of Commons at the Second Reading of the ‘Article 50’ Bill, which you can read here.

The choice at this Election is about the future and who can influence it. If re-elected I will build on my record of influencing the Government to secure the best deal possible for Wimbledon, London and the country.

Crossrail 2 is potentially the most significant local development for a generation, and will have an impact on residents across Wimbledon, Raynes Park and Motspur Park. Since the plans were announced I have campaigned to ensure it will not damage our area.

I am campaigning to ensure that Crossrail 2 brings as little disruption as possible to Wimbledon during its construction, and ultimately benefits our area. However, their current plans are not good enough, so in my response to their consultation, which you can read here, I made it clear that I could not support them as they would have destroyed our Town Centre, and failed to set out how Raynes Park and Motspur Park would be affected.

I also arranged a public meeting in December 2015 so Crossrail 2 could hear directly from residents and ask questions. Over 200 people attended, showing just how strong our community feels about this issue.

It is my view that Crossrail 2 should seriously consider tunnelling opportunities either between Raynes Park and Wimbledon or a longer tunnel into Central London starting from the south west of Motspur Park. I have met with their Managing Director many times to make this point, and I am pleased they are evaluating this option.

Crossrail 2 and the Department for Transport have been re-examining the business case and the ability to fund it. I expect we will know the outcome of this deliberation by the end of July. I then expect there will be a consultation on the next proposals starting in the early autumn.

If re-elected, I promise I will continue to be a strong voice for our community. I will do everything I can to ensure residents are aware of the next Crossrail 2 consultation, and what they are proposing, enabling as many people as possible to have their say. I promise to hold public meetings, so you can find out more and question the management of Crossrail. 2

I will continue to fight to ensure Crossrail 2 works for Wimbledon, Raynes Park and Motspur Park. You can read my longer and more detailed update on Crossrail 2 by clicking here:

Over the last two years in Parliament I have been campaigning for summerborn and premature children to be able to start Reception class aged 5, if their parents think it is appropriate. Some local authorities give parents this right already. However, others make it very difficult or parents to simply do what is best for their children.

It is well documented that children born in the summer months, and premature children can suffer both long term development issues and a lag in educational attainment. These children are also disproportionately likely to report bullying and lower levels of self-confidence, and their overall satisfaction at school is significantly reduced. There has also been a higher incidence of diagnoses of attention deficit hyperactivity disorder and autism among summer-born children. Most of the experts I have met believe that most of those diagnoses are the result of the child struggling from being placed in school too soon, being comparatively immature and struggling developmentally, rather than their suffering from the condition.

In September 2015 I held an Adjournment Debate in the House of Commons on this issue. I was delighted that the Minister for Schools agreed with me and pledged to amend the admissions code to ensure these children can be admitted to reception at the age of five, instead of having to go straight into year 1. He also said he would ensure those children are able to remain with that year group as they progress through school.

Encouragingly the Minister also agreed to look into using a premature child's due date, rather than their birth date, to determine when they should start school.

In October 2016 I held another Adjournment Debate, as there seemed to be little progress in changing the Schools Admissions Code. Since then I have continued to write to Education Ministers and meet with their team to keep making the case for these changes.

If re-elected on Thursday, I will continue to campaign for summerborn and premature children to have the right to start school when they are ready. This will improve the lives of thousands of children. They will be happier, more confident, more academically successful and more likely to reach their full potential.

Finally, I have always tried to make my community emails non political. It has been an honour to have been your Member of Parliament for the last 12 years, and if re-elected I will continue to be your voice in Westminster.

I hope that you will feel able to put your trust in me for the next Parliament and re-elect me on Thursday.

With all best wishes,